Facebook's Ad Library 'failed to provide any measures of transparency'

Tunisia's election commission announcing results of the second round of the presidential poll on October 14, 2019. Photo by the election body [Public Domain].

On October 23, 2019, Tunisia's newly elected president, Kais Saied, was sworn in before parliament. In the second round of the presidential election, Saied garnered 72 percent of the votes (2.7 million votes), beating his rival, business magnate Nabil Karoui, who obtained 1 million votes. According to estimates by the polling company Sigma Conseil, 90 percent of voters aged 18 to to 25 years old voted for Saied.

In spite of a generally low youth voter turnout, the increase in youth participation in the second round of presidential elections reignited the debate over the influence of the internet, and particularly social media, in the outcome.

In the months leading up to the elections, mis- and disinformation spread widely across social media platforms, on Facebook in particular. Observers of the political scene noted the rise of political party- and candidate-affiliated Facebook groups and pages with substantial numbers of followers. Pages without stated ties or affiliations were also actively involved in spreading political disinformation and sponsored content praising certain parties and candidates.

Read more: Ahead of Tunisia elections, social media was flooded with mis- and disinformation

Civil society groups, tech platforms, national institutions, and media professionals all adopted measures to counter the spread of mis- and disinformation during the electoral period. However, in light of the lack of transparency on the part of tech platforms, and the legal void surrounding the regulation of political ads on social media, these measures proved insufficient.

On September 2, the start date of the presidential election campaign, Access Now, along with 14 local civil society groups addressed an open letter to Facebook, asking the company “to implement effective measures for transparency and accountability towards [its] users in the context of the upcoming Tunisian elections.”

The letters’ signatories called on Facebook to take measures ‘’to allow voters to understand how political actors are using Facebook to influence election outcomes,’’ including by allowing public access to information about the number of ads sponsored, the amount of money spent on each ad campaign, the demographics of the targeted audience, and enforcing an ad authorization process on political advertisers.

On October 3rd, Facebook announced the removal of 163 Facebook accounts, 51 Pages, 33 Groups and 4 Instagram accounts that were involved in ”coordinated inauthentic behavior” originating from Egypt targeting ten countries including Tunisia. This is the third time this year that Facebook removes accounts involved in ”inauthentic behavior” targeting Tunisia. In May of this year, a press release announced the removal of accounts responsible for similar activity originated from Israel. In January, the company removed 783 Pages, groups and accounts for engaging in coordinated inauthentic behavior tied to Iran targeting multiple countries including Tunisia.

Following the elections, Facebook responded to the open letter, stating that they have taken measures globally and in the MENA region to fight against misinformation, combat hate speech, and prevent foreign interference, AccessNow told Global Voices.

The company also said they had introduced a new authorization process for political and election-related ads in over 140 countries and territories, including Tunisia, and had made its ad library available in a number of countries outside the EU and North America, including Tunisia.

However, these measures are still not providing voters with sufficient information for them to understand who is trying to influence them and make informed decisions. This lack of transparency also makes it harder for national institutions to oversee political ad spending.

“The level of information granularity provided to users appears to depend in which country the ad is running,” reported a Privacy International analysis published in October 2019.

Facebook says that political ads are archived in its Ad library for seven years. However, Global Voices reviewed the ad libraries of three Facebook pages created in early September, at the start of the first round of the presidential election. These unofficial Facebook pages are a subset of the many that supported then-presidential candidates Abdelfattah Mourou, Salma Elloumi and Abdelkarim Zbidi, and they all ran political ads during the campaign. There are many other pages that supported the 23 other candidates that ran in the presidential election.

Today, the ad libraries of these three pages do not list any of their previous political ads. 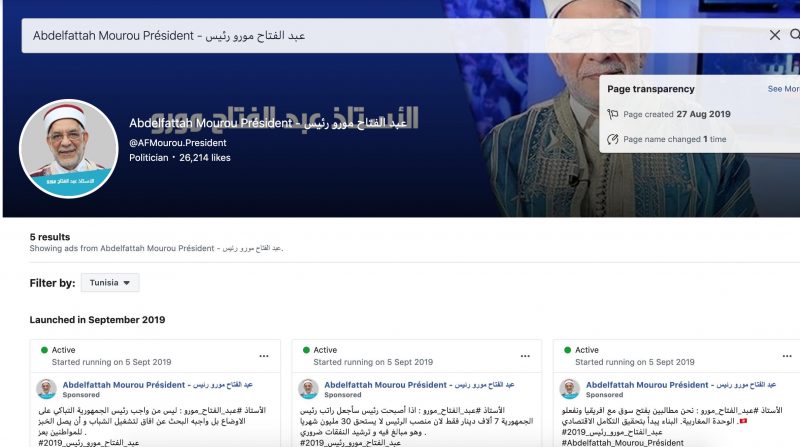 This unofficial page supporting then-presidential candidate Abdelfattah Mourou ran political ads when campaigning for the first round of the presidential poll started in September. Screenshot taken and published on Twitter on September 6 by Mona Elswah. 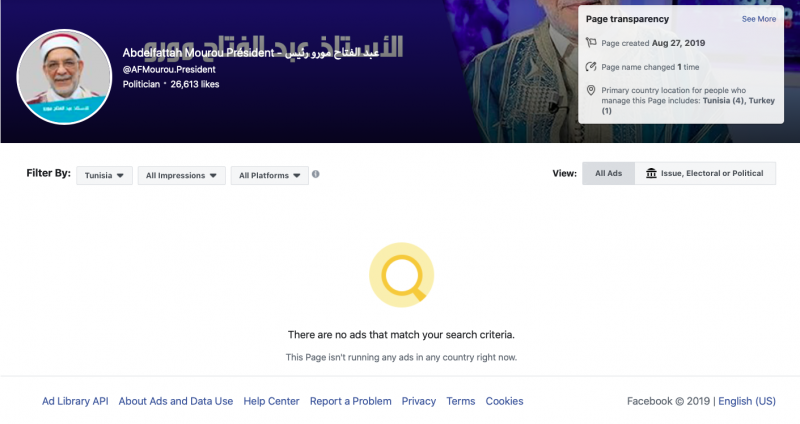 Screenshot [taken on December 5] of the Ad Library of the above-mentioned Facebook page supporting Mourou. The library shows no record of the political ads posted during the presidential campaign.

“The issue lies within the inability of Facebook to determine or distinguish between those pages that have political, cultural or social content,’’ Dima Samaro, MENA policy associate at Access Now told GV. She explained: 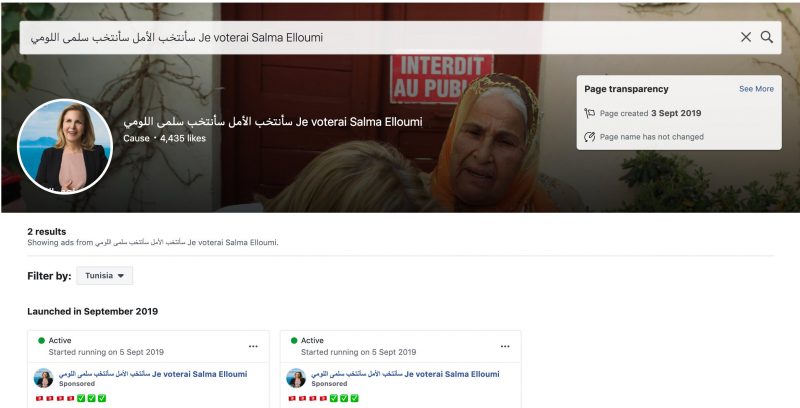 This unofficial page supporting then-presidential candidate Salma Elloumi ran political ads when campaigning for the first round of the presidential poll started in September. Screenshot taken and published on Twitter on September 6 by Mona Elswah. 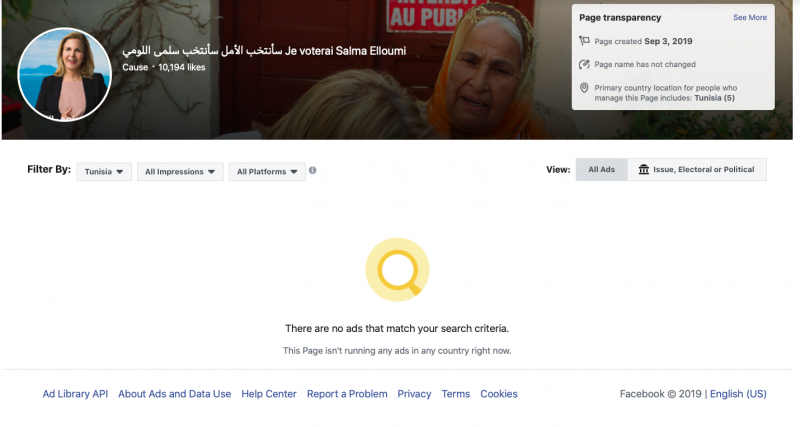 Screenshot [taken on December 5] of the Ad Library of the above-mentioned Facebook page supporting Elloumi. The library shows no record of the political ads posted during the presidential campaign.

The use of sponsored posts on Facebook also drew the scrutiny of the Independent High Authority for the Elections (ISIE). Nabil Baffoun, ISIE’s president, pointed out in a press interview on October 7 that during an electoral campaign, the authority takes into account presidential candidates’ social media advertisements. Electoral campaigns and their financing are subject to the provisions of the Tunisian Electoral Law. In particular, Baffoun confirmed that sponsored pages appearing during the election campaign fall within the scope of Article 143 of the electoral law, which allows the ISIE and the Court of Auditors to impose sanctions for electoral violations, such as exceeding the spending limit and breaches of electoral silence.

In fact, on October 9, ISIE announced the cancellation of a portion of the votes obtained by the candidate of an electoral constituency representing the Tunisian diaspora in France, for breaching electoral silence through political advertisements on Facebook. The commission said that the candidate of 3ich Tounsi, a registered non-profit organisation that filed non-partisan electoral lists during the elections, obtained 207 votes as a result of this advertisement, directly impacting the electoral results in the constituency. No further explanation was given by the ISIE as to how this assessment was made.

This decision was criticized by candidates of the electoral list in question. The Tunisian Association for the Integrity and Democracy of Elections (ATIDE) also called for the electoral commission to adopt transparent measures by publishing its reports monitoring the use of Facebook in relation to the elections. ATIDE also called on the newly elected parliament to “put in place a decisive and comprehensive legal framework on social media advertising during the elections”. 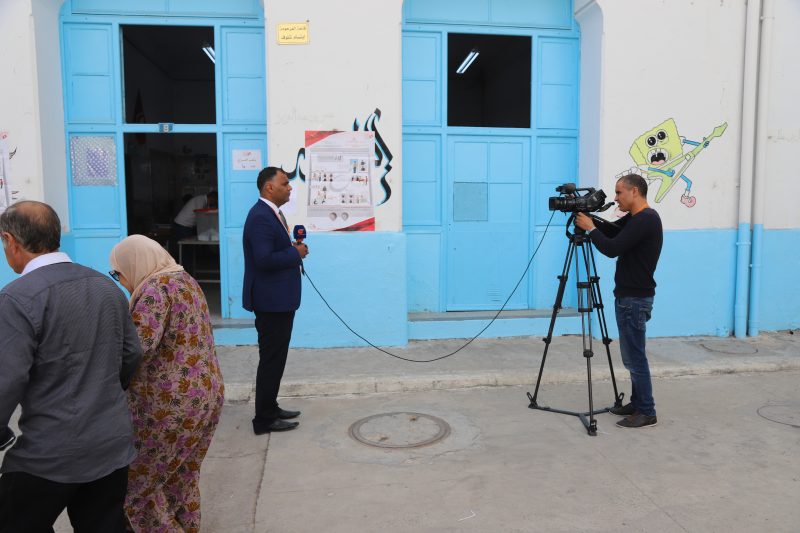 A journalist reporting from a polling station on Election Day on October 13, 2019. Photo by the election body [public domain].

Tunisia's national institutions, civil society groups and media organisations all launched initiatives aimed at countering the spread of mis- and disinformation during the election period.

In August, the electoral commission (ISIE) and the Independent High Authority for Audiovisual Communication (HAICA), the country's broadcast regulator, issued a joint decision comprising four chapters and 49 articles establishing the rules for media coverage of election campaigns. These required local and foreign broadcast media covering the elections to respect the principles of equal opportunity and equity between candidates. The rules did not apply to electronic media.

In partnership with the Council of Europe, HAICA also hosted capacity-building workshops as part of efforts to help media professionals develop the necessary skills to exercise their role in providing reliable and high-quality information.

HAICA, along with the public broadcaster and the Tunisian Press Agency (TAP), launched a fact-checking platform dedicated to exposing misleading information spread online.

During a debate reflecting on L’Economiste Maghrébin's fact-checking experience, journalists highlighted the high financial costs of fact-checking, citing the need for additional recruitment, specialized software and training for journalists.

The relationship between technology, elections, and democracy will develop further in the long term. The spread of disinformation and the rise of foreign interference, among other concerns, have become significant threats for tech companies, national institutions, journalists and voters.

In Tunisia, the shortcomings in the current legislation and the lack of safeguards to prevent future incidents, indicate that cooperation between involved parties and joint efforts to develop countermeasures are crucial in upholding the integrity of elections, and the country's democratic process in general.

This article is part of a series of posts examining interference with digital rights through methods such as shutdowns and disinformation during key political events in seven African countries: Algeria, Ethiopia, Mozambique, Nigeria, Tunisia, Uganda, and Zimbabwe. The project is funded by the Africa Digital Rights Fund of The Collaboration on International ICT Policy for East and Southern Africa (CIPESA).