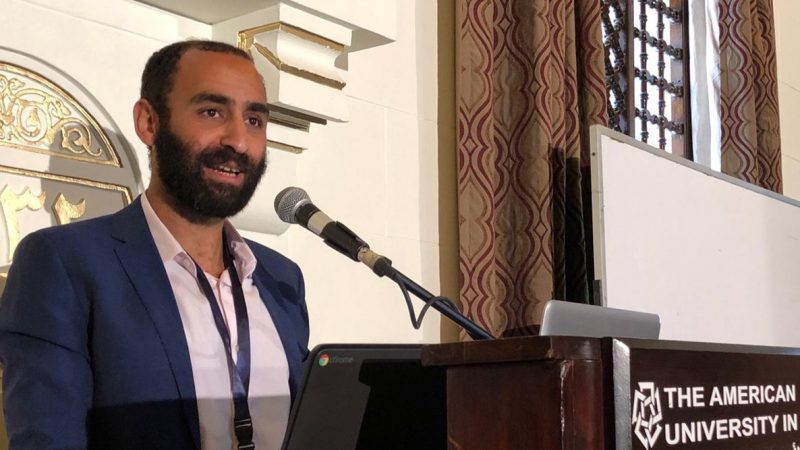 As Karim Ennarah, the head of the criminal justice unit in one of Egypt’s leading human rights groups, spent his 37th birthday on Monday behind bars, calls for his release, along with his detained colleagues, have intensified and gained momentum from sympathizers worldwide.

Ennarah was arrested on November 18, on charges of terrorism, as well as two other senior members of the Egyptian Initiative for Personal Rights (EIPR), one of Egypt’s most prominent human rights groups and among the few remaining after years-long, relentless government attacks on civic space. Their detention, which raised concerns even from Egypt's allies including the US, France and the United Kingdom, came days after their meeting with 13 Western diplomats in which they discussed the situation in the Arab country.

On Monday, Ennarah’s wife, Jesse Kelly, appealed for pressure to keep mounting on Egyptian authorities for his release:

Karim and me on his birthday 4 years ago. Karim turns 37 today but instead of celebrating with me he's in prison. Plz visit https://t.co/V7vjWBpP4J to find out what you can do to help secure his release. @EIPR #FreeKarimEnnarah #freeEIPRstaff pic.twitter.com/hI1chBbQol

A petition that has been launched and circulated on social media has also drawn support worldwide for the activist who was taken in while on vacation in a Red Sea resort.

In a statement issued in response to the global outcry, Egypt's foreign ministry rejected what it described as “any attempt to falsely influence the investigations that the public prosecution conducts with Egyptian citizens who face charges.” An Egyptian foreign ministry spokesperson added in the statement that the Egyptian state “respects the principles of the rule of law and equality” and that the freedom of civil society to operate is guaranteed by the Egyptian constitution and the law.

However, human rights advocates challenge the Egyptian state's claim of upholding the law and respecting human rights. Ennarah, along with EIPR’s administrative chief, Mohammed Basheer, who was detained on November 15, have had no access to their families since their arrest. They were first seen since their detention on Tuesday, when they were brought before a terrorism court in the Police Constables Institute, for an asset freeze decision ordered against EIPR by the public prosecutor the day before.

In a tweet posted on Sunday, EIPR said its lawyers had requested that the Supreme State Security Prosecution allows the families of Ennarah and Basheer to visit them, since neither “have appeared, nor have been seen or heard from since their arrival to Tora Investigations and Liman Tora prisons respectively,” referring to the two detention centers where the activists are held.

EIPR’s executive director, Gasser Abdel-Razek, upon his arrest on November 19, was held in solitary confinement in a cold cell, denied warm clothes and had his head shaved. Amnesty International said in a statement on November 24, that it feared “the veteran human rights defender and father of two is being deliberately held in poor conditions to punish him for his human rights work.”

Acting director of EIPR Hossam Bahgat said on November 28 that it was only after mounting pressure on authorities that Abdel-Razek’s detention conditions improved.

Your outcry paid off Gasser is no longer hungry and cold please don’t stop ? https://t.co/a13FUAKWLR

Terrorism charges — which the trio face — have been leveled against scores of human rights advocates by the Egyptian authorities over the past years, and has seen many of them languish in prison. The Egyptian state denies holding prisoners on political grounds.

“It is absolutely abhorrent to retaliate against human rights defenders from one of Egypt’s last functioning human rights NGOs, simply for exercising their right to freedom of expression by discussing Egypt’s human rights situation,” UN human rights experts said in a statement issued on November 27, following EIPR’s arrests.

EIPR and its three detained staffers have been at the forefront of speaking out for human rights in Egypt for 18 years. They have stood up for thousands of detained opposition members in overflowing Egyptian cells since 2013, when the overthrow of the country’s only freely elected president marked the start of an unprecedented campaign against the opposition.

“These arrests underline the very grave risks human rights defenders face in Egypt every day while carrying out their legitimate work,” the UN experts’ statement said.

In February, EIPR’s gender rights researcher, Patrick Zaki, was arrested upon his return to Egypt from Italy where he was studying. He remains in pre-trial detention on charges relating to terrorism and incitement.