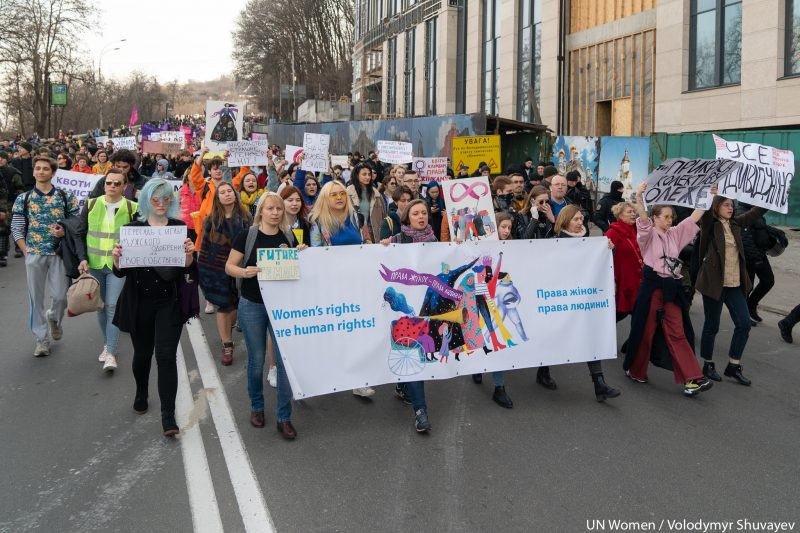 In the years following major civic and political upheaval, Ukraine has made modest progress in exposing corruption and digitizing government services for the public, though not without a few stumbles along the way. Despite these successes, the country's civil liberties and human rights status remains precarious.

A new monitoring report by ZMINA Human Rights Center, focuses on the ongoing persecution of activists and human rights defenders in the government-controlled part of Ukraine. It chronicles the key trends and highlights the most high-profile cases of pressure on civil society in January-March 2021.

The report, prepared in partnership with the Netherlands Helsinki Committee and funded by the European Union, notes that a total of 30 instances of persecution for civic activities were recorded in the first quarter of this year, compared to 26 cases for the same period last year.

In the context of decentralization, mobilization of efforts in solidarity struggle with the consequences of the COVID-19 pandemic, socio-economic perturbations, the issue of persecution of activists and human rights defenders, as well as impunity for such persecution, becomes increasingly important for promoting and upholding human rights standards and protection of public interests.

Physical attacks, property damage and intimidation are among the key threats to activists in Ukraine. Infographic by ZMINA, screenshot from Monitoring Report on zmina.ua.

Among the incidents that occurred in the first three months of 2021, the most common were physical assaults, destruction or damage to activists’ property, and attempted intimidation (six cases in each category). In addition, ZMINA recorded five cases of smear campaigns, three attempts to obstruct a peaceful assembly, two incidents of legal prosecution, one case of violation of privacy and one case of search without legal grounds.

Which activities are the most risky? Infographic by ZMINA, screenshot from Monitoring Report on zmina.ua.

The report notes some of the more risky activities that rights defenders were persecuted for relate to work on anti-corruption issues, LGBTQ rights and women’s rights. ZMINA recorded three cases of persecution in each category, the authors admit it is “difficult to identify one activity of activists as the most risky” as they often overlap. One incident of activist persecution each was recorded for opposing illegal construction, protecting the environment, supporting and protecting the rights of patients, and protecting the rights of journalists.

The report also documents a number of digital threats to civic activists and journalists. The Digital Security Lab, a non-profit digital rights organisation in Ukraine which monitors such incidents and provides assistance to victims, recorded 25 separate incidents in the first three months of 2021: six in January, twelve in February, and seven in March.

The monitoring recorded 10 phishing attacks (one of which was a large scale one, carried out on Telegram in January); seven cases of stealing, resetting or reusing activists’ account passwords; three cases of text message interception (commonly used to get around two-factor authentication), two cases of website hacking, as well as content blocking or temporary blocking of accounts in social networks. Several activists also reported receiving intimidating messages or threats through digital channels.

Who poses a threat to Ukraine's activists?

The ZMINA report singles out several key types of actors obstructing the work of civic activists and human rights defenders. These include lawmakers debating or passing legislation that is discriminatory against civil society, e.g., bills that equate advocacy with lobbying, introduce Russia-style “foreign agent” designations, or threaten the right to peaceful assembly and freedom of association. A number of cases in the report concern law enforcement and, in particular, the disproportionate response of police forces during peaceful protest rallies.

There are also numerous reports of judicial pressure, namely investigations and trials of high-profile criminal cases involving human rights defenders and civic activists, initiated by state prosecutors or private individuals. On the other hand, the researchers highlight the impunity of attacks on rights defenders: long-standing investigations of several high-profile cases of attacks against activists (such as Kateryna Handzyuk or Iryna Nozdrovska, both of whom lost their lives) have remained unresolved for years.

One of the authors of the ZMINA report, Anastasia Moskvychova, told public radio service Hromadske Radio that impunity remains a key obstacle to the work of human rights activists in Ukraine.

At the moment more attention is being drawn to the attacks on activists, so this may be why the number of reports is growing. But the statistics are very disappointing.

Moskvychova believes it is all the more important to raise awareness of the threats and obstruction of activist work in Ukraine as “the point of the persecution is to silence the activists and to get them to stop their activity”.