The activist has been detained for two years without trial 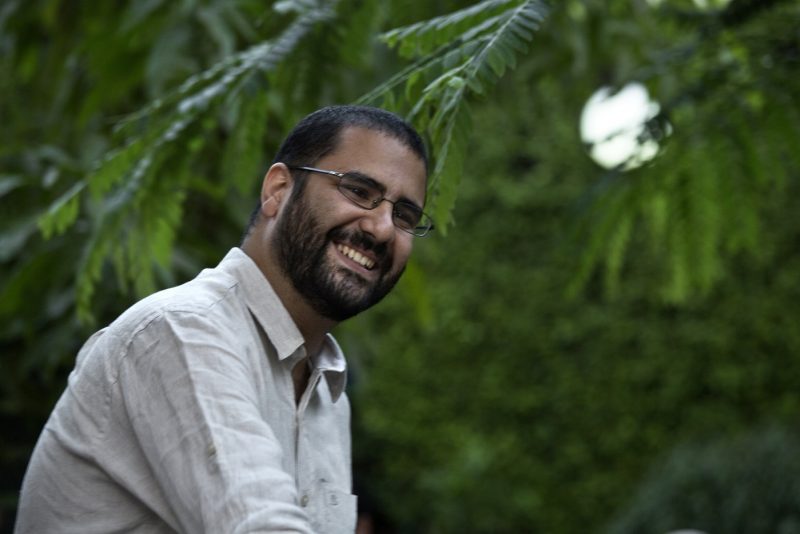 The life of Egyptian blogger and activist Alaa Abd El Fattah is in danger. The 39-year-old was jailed in 2019 on charges of spreading fake news, but, despite the limits of Egyptian law, he has yet to go to trial.

At a recent hearing concerning the case, his lawyer spoke of Abd El Fattah's declining mental health and quoted him saying, “I can't carry on.”

A vocal advocate for open technologies that enable everyone to speak freely, and a prominent voice during the Arab uprisings in 2011, Abd El Fattah has been jailed or investigated under every Egyptian head of state who has served during his lifetime. In 2006, he was arrested for taking part in a peaceful protest. In 2011, he spent two months in prison, missing the birth of his son, Khaled. In 2013, he was arrested and detained for 115 days without trial, before eventually serving a five-year sentence, and then embarking on an additional five-year probationary period, in which he was forced to spend every night in his local police station.

Several months into this probationary period, he was re-arrested on allegations of spreading fake news and joining a terrorist organization. He has since been held in a maximum-security wing of Tora Prison, but has not been brought to trial. In April of 2020, he carried out a hunger strike over the course of three weeks. On September 29, 2021, his time in pre-trial detention exceeded the maximum time limit stipulated in Egypt's penal code. Yet he remains in prison.

Apart from a brief period of exception during his hunger strike, Abd El Fattah has had no access to reading material and no allowance of time outside his cell for exercise or fresh air. He is not allowed to keep a watch or clock. Since COVID-19 restrictions began, he has been afforded only one 20-minute visit per month.

In recent weeks, Abd El Fattah's family and lawyer have sounded the alarm for his safety, raising concerns that his mental health is deteriorating and that he is contemplating suicide.

In a statement published on Facebook, his family put forth a plea for his safety and release:

Alaa is in imminent danger…His mental health is failing after two years of careful planning and cruel implementation by the Interior Ministry and National Security Agency. His life is in danger, in a prison that operates completely outside the space of the law and with the complete disregard of all officials, foremost among them the public prosecutor, the interior minister, the justice minister, and of course the president.

Advocates throughout the Arab region and the world have joined his family in calling for his release. Short of this, they demand that he be transferred to a different prison with improved conditions, including access to literature, exercise outdoors, and more frequent visitation.

Global Voices joins these groups, and international organizations including Amnesty International, the Committee to Protect Journalists, the Electronic Frontier Foundation, and SMEX in the call.

We also encourage supporters to order his forthcoming book, “You Have Not Yet Been Defeated.” Indeed, despite his ordeal, Abd El Fattah has written a series of texts while in detention that have been compiled and edited by the independent publisher Fitzcarraldo Editions in the UK. Due to launch on October 20, the collection includes an introduction by the Canadian writer and social activist Naomi Klein.

The book also features some of Abd El Fattah's more recent writings for Egyptian independent media outlet Mada Masr. In one of these essays, titled “Our bodies and enmity: A personal introduction,” he writes about the “story” of prisoners’ bodies and reflects on the deep effects of state control on his body:

The story is not about prisoners’ health, but the health of the nation. It is a story of oppressive tools passed down for generations and a vicious enmity that will be inherited by future generations. The total negation of the voice and body is the impetus of the enmity. We think of an enmity as a willful decision to pursue a feud and inflict pain, but if you see and hear me, there’s a chance for retreat and a truce; even if we don’t take advantage of it, we at least remain on equal footing. When the feud rages, you don’t see or try to understand me. I become an object, something to be eliminated, destroyed, disappeared, negated, excluded; I become a symbol or a bogeyman, without a material, physical presence. An enmity’s legacy is the price paid by all bodies, and they continue to pay it even after the feud fades.

How do we protect our children’s bodies from this legacy of prisons? The solution does not stop with the release of detainees. It starts with release, but must end with an imaginative vision for the erasure of prisons, not prisoners.

Support the campaign to #SaveAlaa

On Tuesday, October 5, supporters around the world will be using the hashtags #SaveAlaa and #FreeAlaa to amplify this call. Here are actions that anyone can take in support of the campaign: