That list now expands over some twenty entities, critics say 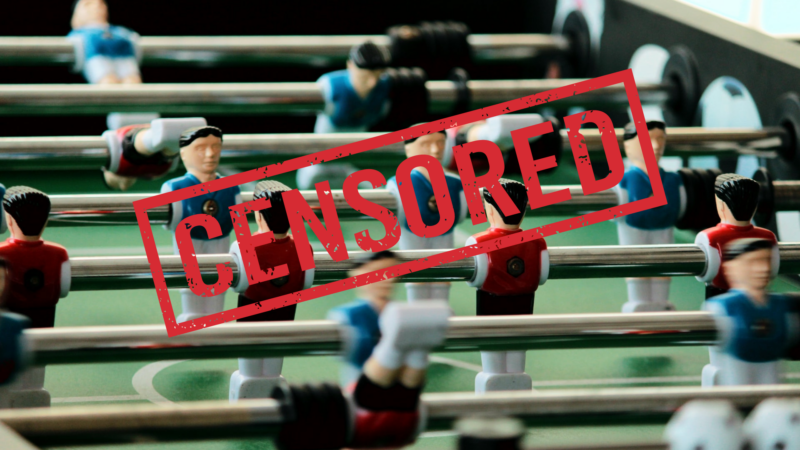 Original photo by Alex Rosario on Unsplash. Image by Ameya Nagarajan. Used under the Unsplash license.

In December 2021, an article added to law No. 5894 (Law on the Establishment and Duties of the Turkish Football Federation) granted the Turkish Football Federation authority to block access to broadcasts and URLs in case the federation determines the broadcasts are illegal. From the outside it may look and sound like a legitimate decision: the football federation trying to prevent illegal broadcasts of games. But looking closely, and analysing it through the prism of the pervasive environment of censorship in Turkey at the moment, granting a football federation rights to censor content in the absence of a court order is yet another sign of a narrowing environment for freedoms. Critics described the move as  “undisputed censorship” and “unconstitutional.” Today, some twenty entities have been granted powers to censor content online, including the Banking Regulation and Supervision Agency, the Directorate for Religious Affairs, the Capital Markets Board, the National Lottery Administration and others.

According to the new regulation, if it is determined that the broadcasts related to football matches within the borders of the Republic of Turkey are made available on the internet, the Board of Directors (of the federation) may decide to block the access (in the form of URL) by conveying its decision to the Access Providers Association. The association then blocks the site. In case the requested content cannot be blocked, the TFF Board of Directors can decide to block access to an entire site (in the absence of court approval.)

The blocking decision can be appealed at the Criminal Judgeship of Peace within a week of blocking taking place. Persons in the unit established within the TFF to implement the access ban decision can also authorise blocking if requested. By February 2022, the federation had successfully blocked access to over 800 sites. The censorship applies to video content including match summaries, score footage from the games, and entire sites due to these broadcasts.

According to lawyer Kerem Altiparmak, from a legal point of view, the authority given to the TFF is unconstitutional and paves the way for censorship. Altiparmak points out that the biggest problem with the authority given to the TFF is the seven-day deadline to appeal the blocking decision. “There is a measurement problem here. Why seven days? The Information Technologies Authority [(BTK] makes a decision on blocking access in matters related to public order and national security, and yet this decision is submitted to the judge's approval within 24 hours. Under normal circumstances, if such authorization is given, they should have submitted to the approval of the judge within 24 hours and brought a condition for repeal.”

The Criminal Judgeships of Peace are often used as censorship mechanisms in cases of blocked content. Established in 2014, the Criminal Judgeships of Peace are the first to order blocking decisions. They also lack impartiality. According to an internal system of appeals, a peace judge can appeal to another peace judge making the process contrary to the rule of law. In most of the cases documented until now, the appeals made to one criminal judgeship of peace based on the decision of another criminal judgeship  of peace have been rejected. This horizontal system of appeals was criticised by the Council of Europe’s Venice Commission, the Council of Europe's Commissioner for Human Rights, the Office of the UN High Commissioner for Human Rights, and the UN Special Rapporteur on freedom of opinion and expression.

These courts are often used by state officials, ruling Justice and Development Party (AKP) members, and other state allies to block access to social media content, individual online news items, and entire websites often critical of these actors, as well as corruption allegations involving these actors on the grounds their personal rights are violated. Even companies affiliated with or that have done business with the state can rely on these courts to block online materials where they are compromised.

Another example includes President Recept Tayyip Erdogan’s former lawyer successfully managing to block access to over 170 news items mentioning the lawyer’s involvement in a murky court proceeding involving Tefal and a Turkish company. The lawyer applied to the Istanbul 9th Criminal Judgeship of Peace twice to impose an access block on all the news items mentioning his name, the first time getting the court to block some 130 articles and the second time another 40 articles.

The list of online news items blocked on the orders of criminal judgeships of peace is long and continues to grow. Some of these websites face blocking consistently. Etkin News Agency (ETHA) was blocked more than 40 times according to the Free Web Turkey Platform. The blocking also extended to ETHA's Twitter account based on a government request backed by a decision of the Diyarbakir Criminal Judgeship of Peace. ETHA’s Facebook account has been blocked since 2018, also through a court order. On September 12, the court ruled to block the website for the 47th time.

In July, 2022 upon request of the first lady Emine Erdogan, the 2nd Criminal Judgeship of Peace in Istanbul ruled in favour of her request to block access to news items mentioning her connection to an environment agency that has recently been granted tenders along Turkish coasts. This was a unique example of double censorship in Turkey. The first ban blocked access to the news about the Environment Law and changes made to the law authorising the environment agency to hold tenders for eyebolts and buoys along the entire coast of Turkey. The second access ban concerned the news items about the first blocking. But this was not the first time the family of Erdoğan were successful at getting news blocked mentioning their names or other ruling party members. In 2021, Free Web Turkey, published a report in which the independent watchdog documented blocking of 1,910 URLs through 150 court decisions mentioning either President Erdoğan , his family members, other AKP members or the state overall. Most recently in August 2022, news items that have used images by Brazilian cartoonist Latuff of President Erdoğan were censored in Turkey through the ruling of Istanbul Anadolu 1st Criminal Judgeship of Peace on the grounds of personal rights violations.

An investigation published by Reuters in August 2022, revealed how the media in Turkey “has become a tight chain of command of government-approved headlines, front pages and topics of TV debate.” Based on interviews with the media, state officials, and regulators, the report is a sobering overview of the extent of media capture and control mechanisms that have been introduced over the years in a country that once had a thriving media environment. The censorship has been consistent and normalised across all avenues, including the internet and the social media platforms that have been forced to comply with the national laws.