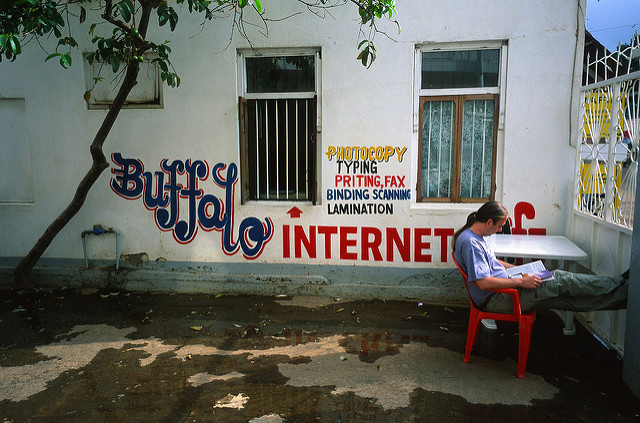 A sign for an Internet cafe in Tanzania. Tanzania is one of the top 10 countries with most Internet users in Africa. Creative Commons photo by Flickr user Aslak Raanes.

It is alleged that the five shared offensive content targeting the president and the police between August 24 and 30 this year, in violation of Section 118 (a) of the Electronic and Postal Communications Act No. 3 of 2010.

The section imposes a criminal penalty on any person who:

knowingly makes, creates, or solicits or initiates the transmission of any comment, request, suggestion or other communication which is obscene, indecent, false, menacing or offensive in character with intent to annoy, abuse, threaten or harass another person…

Of the five accused, state prosecutors allege that Mr. Mtegwa posted an abusive and offensive comment on a WhatsApp group called DSM 114U Movement in Kiswahili. Roughly translated, the comment in question reads:

I don’t know what is going on in JPM’s [Tanzania's President John Pombe Magufuli] head… He doesn’t even know how to say sorry. We are at this stage because of one person who believes that what he thinks is always right…he needs to understand that politics isn’t about resentment and the Opposition isn’t an enemy…he should learn to compete with the Opposition on the basis of debate, not force.

In another recent case, Dr. Oscar Magava, a lecturer at the Mkwawa University College of Education in Iringa region, was arrested for allegedly insulting the president.

Regional Police Commander Dr. Julius Jengi Gava said on September 15 they received reports that the lecturer used social networks to the abuse the president. He did not specify which social network he used and what exactly Magava said about the president.

Since President John Magufuli won the presidential election in October 2015, 14 people have already being arrested and charged for insulting the president on social media. Thus far only one citizen, Isaac Abakuki Emily, has been found guilty of these charges. He was convicted in June 2016 of insulting Tanzanian President John Magufuli on his Facebook page by the Arusha Resident Magistrate’s Court.

Tanzanian citizen Leonard Mulokozi was charged on June 22 under Tanzania's Electronic and Postal Communications Act over a WhatsApp message that authorities say is “abusive” to Tanzanias president, John Magufuli.

In October 2015, two Tanzanians became the first victims of the new law. Benedict Angelo Ngonyani, a 24-year-old student at Dar es Salaam Institute of Technology, was charged for publishing materials which are “false or not verified by relevant authorities.” It is alleged that he posted a Facebook post claiming that Tanzania's Chief of Defence Forces, General Davis Mwamunyange, had been hospitalized after eating poisoned food.

In November 2015, four Tanzanians — Leila Sinare, Godfrey Soka, Deo Soka and Monica Gaspary Soka — were charged under Section 16 of Cybercrime Act for publishing false, election-related information on WhatsApp. Public prosecutors alleged that the accused published audio information on a WhatsApp group called the “Soka Group”, that was intended to mislead the public during the October 2015 Tanzanian general elections, which were plagued by accusations of vote-rigging.

Most of these citizens have been charged under the controversial relatively new Cybercrime Act. Authorities frame the Cybercrime Act as an important tool for fighting child pornography, cyberbullying, online impersonation, racist and xenophobic content online, unsolicited messages (i.e. spam), illegal interception of communications, and publication of false information.

The controversial law was signed into law by the former President Jakaya Kikwete in May 2015, despite criticism from opposition politicians, social media practitioners, and human rights activists.