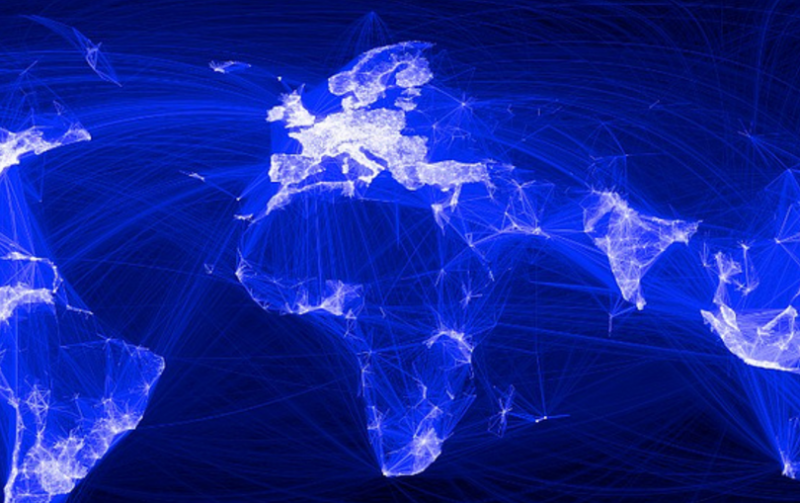 Authorities in France ordered 834 websites to be blocked and 1,929 to be delisted from internet searches in 2016. Targeting more than 2,700 websites in total, the actions are intended to fight “child pornography and terrorist content.” These figures have more than doubled compared with the previous year's results.

There is no indication that this rise is due to either a greater police vigilance or an increase in the number of such websites.

Rather, the situation has changed since a decree on February 5, 2015, which implemented the law passed on November 13, 2014. Intended to “strengthen measures for the fight against terrorism,” the law was fully adopted after the attacks in Paris in Saint-Denis, and after photos from inside the Bataclan theatre were uploaded to Facebook during the massacre. Under the law, authorities can now order the blocking of sites which “incite or sympathise with terrorism” without the approval of a judge. In addition, social networking sites such as Facebook can be told to withdraw content. 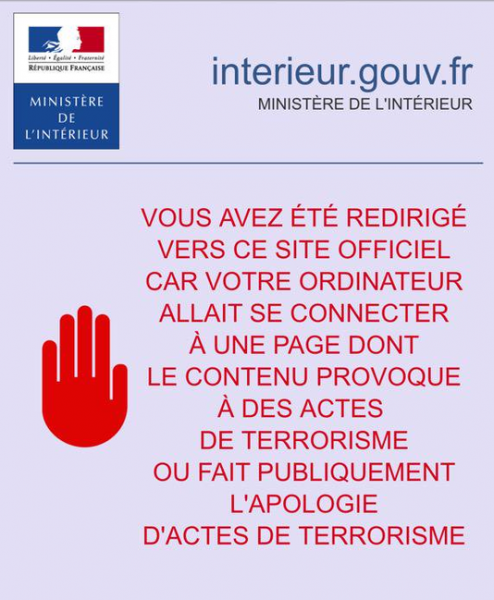 The official data for 2016 were shared by French Interior Minister Bruno Le Roux at the 9th International Cybersecurity Conference in Lille, France on January 24-25, 2017.

According to a report published in April 2016 by the CNIL, the official French data protection body, 312 sites were blocked and 855 delisted in the year from March 2015 to February 2016, amounting to a total of 1,167 websites.

The official message displayed on sites that have been blocked reads: “You have been redirected to this official website because your computer was about to connect to a web page that incites or publicly supports acts of terrorism.”

How the measures work

The first report was issued by the CNIL's “qualified person”, who is responsible for checking routine requests for content withdrawal, website blocks and delisting. In non-routine cases, the “qualified person” may issue a recommendation or refer to an administrative judge. If the illicit content is taken down, then the website will not be blocked.

A special division of the French police monitors the internet and when any content prohibited by the law is identified, the content's host is asked to delete it. If the host does not reply in 24 hours, or is not contactable, the police division contacts internet service providers and asks them to block the relevant website and informs the “qualified person” at the CNIL.

A content owner or host can contest any decision to block or delist online content before a judge, but to date, no tribunal has gone against the rulings of the French Interior Ministry. Moreover, no appeal has exhausted all possible legal avenues.

There is no list of websites that have been subject to withdrawal of content, blocking, or delisting. Such absence of transparency is concerning, despite the esteem in which the CNIL is held. As things stand, the CNIL and the police service check each other, with no additional oversight.

The CNIL report from April 2016 specifies that there have been no instances of sites being blocked when they should not have been, which is known as “overblocking”. Equally interesting is the number of attempted connections to banned sites: 34,000 on average to child pornography websites, and 494 to terrorist content. All connection attempts have been anonymised at the request of the CNIL. Furthermore, the report states that in the case of child pornography websites, after one site has been blocked, new, identical websites regularly appear with a slightly altered address.

Also speaking at the forum was Octave Klaba, the media-savvy founder of OVH, a French and European website-hosting giant. He criticised the rise in censorship, calling it political posturing. Mr. Klaba labelled it “useless given the global nature of the internet.” Previously, he has made clear his opposition to the surveillance measures introduced by the Information Law of July 24, 2015, which creates provisions that legalize listening to and recording certain types of conversations without a judge's authorisation. The OVH founder has threatened to move some of his servers and his company's operations out of France, though he has not done this as of yet.

The content of Interior Minister Le Roux's interventions was published by the Associated Press agency and covered by Le Monde and Métro. They have received little coverage elsewhere. This may be due to the fact that he spoke mainly on the subject of security against cybercrime, which interests governments and businesses alike. Is the lack of media coverage in France a sign that the twists and turns of the presidential race and the attack on the Louvre have swallowed up public and media attention? La Quadrature du Net, a well-known French defender of internet freedoms, also has yet to report on the 2016 data.

It is worth noting that there was ample reaction when these measures were originally brought in to block sites in 2015. One English-language intervention came from European  Digital Rights, a group of European organisations that defend civil and human rights, and the website Islamic News, which was blocked shortly after the law was enacted, wrote this piece criticizing the blocking policy.

It is important to acknowledge that France, together with much of Europe, does not consider freedom of expression to be absolute, unlike the USA. Freedom of expression in France is framed by laws which forbid inciting racial, ethnic or religious hatred, supporting war crimes and terrorism, and infractions that result in prosecutions. Nevertheless, these limits do not preclude the need for transparency and oversight in online content policy enforcement.