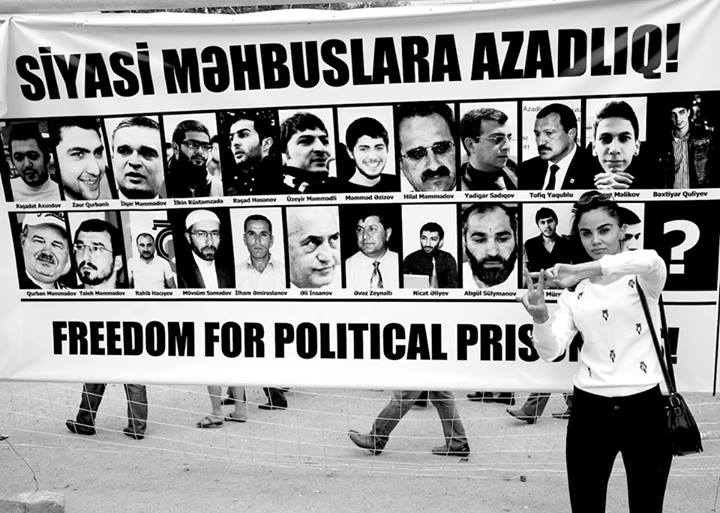 Azerbaijani video blogger Mehman Huseynov was sentenced to two years in prison on charges of slander over videos he shared on his Facebook page. His page, where he covers a range of topics including working conditions and the wealth of government officials, has more than 300,000 followers.

Arresting, silencing, and intimidating journalists, bloggers, and activists is par for the course in Azerbaijan these days, but Huseynov is the first blogger or journalist to be officially sentenced for slander by a court in Azerbaijan. Prior cases of journalists or bloggers being sentenced typically involved charges like narcotics possession (often bogus), hooliganism, abuse of power, and tax evasion.

According to Amnesty International and other researchers, several activists have reported finding someone had impersonated their emails and Facebook accounts in order to identify and compromise others they communicate with. Dissidents in the country have experienced similar attacks in the past, and Azerbaijan is among the countries that sought to acquire targeted surveillance software from the company Hacking Team — but many fear this is a sign the political circumstances for human rights defenders in the country are likely to get worse.

Censorship is rising in France — is anyone watching?

The number of websites blocked and delisted (i.e. removed from search engine results) more than doubled in France in 2016 compared with past years. Under a law passed shortly after the 2015 attacks in Paris, 834 websites were blocked and 1,929 were delisted in the last year, an increase likely tied to the counter-terrorism regulation that enables authorities to order the blocking of sites without the approval of a judge. There is no list of which websites have been blocked or delisted, making it difficult to assess how authorities are implementing the rules, and whether or not any sites have been blocked without legitimate cause. The NGO coalition European Digital Rights and the website Islamic News, which was blocked shortly after the law was enacted, have both criticized the policy.

Yet again, Chinese scientists have spoken out against the country’s web filtering system, the Great Firewall, arguing that the system damages research. Luo Fuhe, vice-chair of the national advisory body the Chinese People’s Political Consultative Conference, recently submitted a proposal urging the government to improve loading speeds for overseas websites. As in the past, shortly after local media began to pick up coverage of the proposal, reports started to be taken down by national censors.

In Pakistan’s National Assembly, multiple officials, including Interior Minister Chaudhry Nisar Ali Khan, have called for bans on social media platforms that allow blasphemy. This is not unprecedented by any means — YouTube has been temporarily blocked multiple times, and was banned from late 2012 to early 2016 due in large part to content deemed offensive to religious sentiment. Increasingly, individuals and organized groups use accusations of blasphemy are used as repressive tactics to silence others. Two major TV networks have been embroiled in legal blasphemy cases in the last two years.

Representatives also have linked these arguments with concerns about social media users criticizing government officials online. Local news outlet Dawn summarized a statement from the Interior Minister indicating that “no country could allow religious sentiments to be hurt or top state functionaries to be subjected to ridicule under the pretext of freedom of expression.”

Facebook: Developers can no longer use data for surveillance purposes

Facebook announced new prohibitions against the use of its data by developers for the purposes of mass surveillance. Last fall, the ACLU found that Facebook, Instagram and Twitter sold user data to Geofeedia, a company advertising social media surveillance tools to police in the US to monitor protesters and activists of color. With Facebook’s latest response, all three platforms now have a clearly stated policy that bans the use of their data, which can be obtained through their platform APIs, for surveillance purposes.

South African social media users pushed back strongly against reported plans to regulate social media to counter false narratives and the spread of fake news. Rallying around the hashtag #HandsOffSocialMedia, South Africans have accused the government of seeking to control expression and discourse in the country.

The Philippine government announced plans to give media accreditation to bloggers and social media publishers. Accreditation will grant bloggers easier and faster access to media passes for government events, but would restrict the use of “offensive, inflammatory, or provocative” language. The proposal would also require that they publish press releases and statements from the Presidential Communications Operations Office. Several prominent independent media workers expressed concern about these requirements at a recent town hall meeting, including journalism professor Danilo Arao, who later wrote that the policy would reduce accredited bloggers to “mere mouthpieces” of the Presidential Communications office.

Why did Russia add a secure app to its “information dissemination organizer” list?

Russian media regulator added the messaging app Threema to its Registry of Information Dissemination Organizers, the first time it has included a foreign app to the list. The list was introduced after a federal law was passed requiring all websites to store Russian users’ metadata and make it available to authorities. Threema claims it offers users full anonymity, though it has not released its full code to the public for vetting that this is the case.

Syrian web developer has been in prison for five years

On March 15, 2012, web developer and human rights activist Bassel Khartabil was imprisoned by the Syrian government in Damascus. Since October 2015, his whereabouts have been unknown. Creative Commons and the FreeBassel campaign are proposing a set of actions that friends and followers can take to express their support for his release.