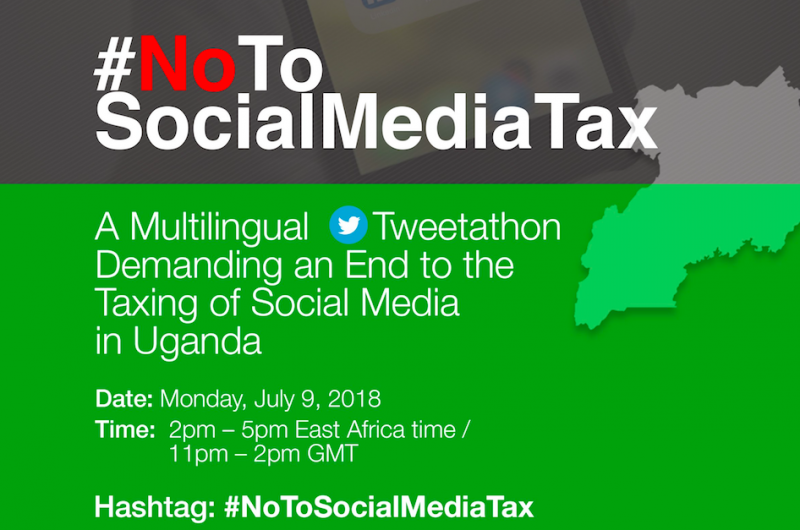 Join the Global Voices Sub-Saharan Africa team (@gvssafrica) for a multilingual tweetathon demanding an end to the taxation of social media in Uganda.

On July 1, the Ugandan government began enforcing a new law that imposes a 200 shilling [US$0.05, £0.04] daily levy on people using internet messaging platforms, despite protests to the contrary from local and international online free speech advocates.

This move, according to Ugandan President Yoweri Museveni, has the dual purpose of strengthening the national budget and also curtailing “gossip” by Ugandans on social media. It was also popular among local telecom providers, who do not directly benefit from the use of foreign-based “over-the-top” services such as Facebook, Twitter, and WhatsApp.

The polic was preceded with an order to register all new mobile SIM cards with the National Biometric Data Centre. The measure also forces Ugandans to only use mobile money accounts in order to recharge their SIM cards and makes it mandatory to pay a one percent levy on the total value of transaction on any mobile money transaction.

These new policies make it more costly for Ugandans — especially those living in poverty — to communicate and perform everyday tasks using their mobile devices.

On July 2, civil society and legal advocates in Uganda filed a court challenge against the law, arguing that it violates the country's constitution. 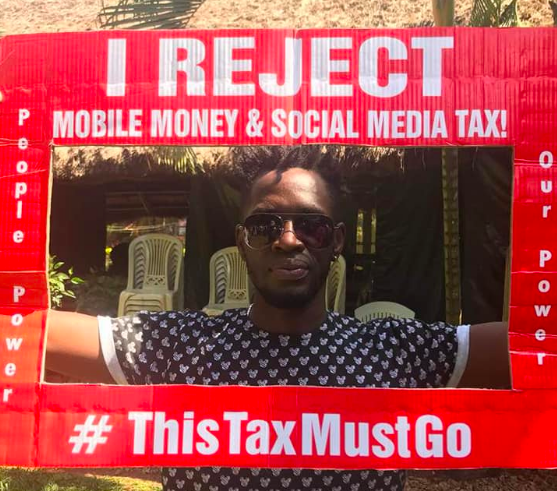 A protester demonstrates his opposition to Uganda's social media tax at a gathering on July 6, 2018.

On July 6, concerned citizens and civil society advocates issued a joint press statement [see below] calling on Ugandans to avoid paying the tax by using alternate methods to exchange money and access social media, and to join a “National Day of Peaceful Protest Against Unfair Taxation” on Wednesday, July 11, 2018.

The Global Voices community and our network of friends and allies wish to support this and other efforts to demand an end to the tax. We believe that this tax is simply a ploy to censor Ugandans and gag dissenting voices.

We believe social media should be freely accessible for all people, including Ugandans. The Ugandan social media tax must go!

On Monday, July 9, beginning at 14:00 East Africa Time, we plan to tweet at community leaders, government and diplomatic actors, and media influencers to increase awareness and draw public attention to the issue. We especially encourage fellow bloggers and social media users all over the world to join us.

Tweets you can use:

On Tuesday, 3 July, 2018, we young people and youth leaders from various student guild governments, musicians and artistes, Small and Medium-sized Enterprises and the Parliament of Uganda held a Press Conference at which we expressed our serious reservations and grave concerns about the amendment to the Excise Duty (Amendment) Act which levies a tax on social media access and an extortionist one per cent (1%) charge on Mobile Money transactions.

We implored the Speaker to recall Parliament from recess and asked the Leader of Government Business to table a motion to repeal the amendment by Friday, 6 July, 2018. The deadline elapsed a few hours ago and we are here to announce the way forward:

i) We invite citizens and subscribers to stop transacting via any of the Mobile Money services and as an alternative, rely on physical payment methods so as to avoid paying the unfortunate tax;

iii) We also call upon Members of Parliament to expedite the process of recalling the House but also to conduct consultations in their constituencies regarding this matter;

iiii) Finally, we are declaring Wednesday, 11 July, 2018 as a National Day of Peaceful Protest against Unfair Taxation. In this regard, we invite citizens to deliver petitions to their Members of Parliament and to dress up in red coloured attire as they go about their daily business. We have already notified the Uganda Police Force and a copy of the notification is available.

We will continue engaging our respective constituencies and leaders to protest, reject and continue the boycott until the poorly thought-out taxes are rescinded. As young leaders, we have undertaken research and consultations and are willing to suggest better avenues and models of taxation that are sustainable and beneficial to both the citizen and the state.