A roundup of digital rights news from across the globe. 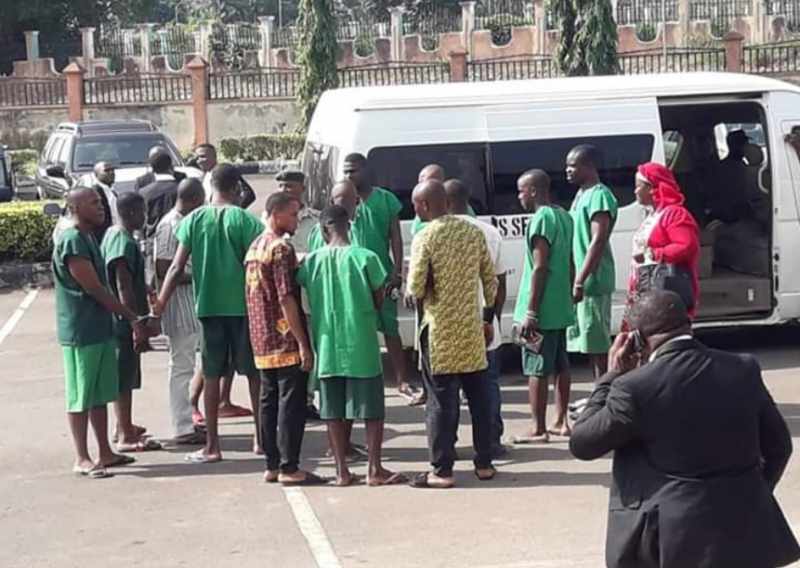 The Madonna 7 outside the courthouse. Photo provided by Vivien Douglas and used with permission.

The Advox Netizen Report offers an international snapshot of challenges, victories, and emerging trends in technology and human rights around the world. This report covers news and events from July 6 – July 19, 2019.

Rules against online “insult” have long been a feature of cybercrime and other internet-specific laws around the world. While they may be intended to reduce online harassment — which can have a stifling effect on free speech — such policies also can be abused by government authorities seeking to curb critical speech of a political nature.

One recent example of this trend has been at issue in Nigeria, where seven students and alumni of the privately-owned Madonna University in the Niger Delta, Nigeria could face up to seven years in jail over social media posts denouncing poor conditions and mistreatment of students and staff at their university. Nigerians on social media are advocating for their exoneration, calling them the “Madonna 7.”

One member of the group appears to have been targeted for running a WhatsApp group where people discussed concerns about the school administration, including allegations that administrators had locked up a staff member who had spoken critically about school policies.

All were granted bail on July 3 and released from a detention facility where they had been held since March 2019 after being charged under Nigeria’s Cybercrime Act. They are accused of sending “false messages” through social media which caused “annoyance, inconvenience, danger, insult, injury, criminal intimidation” to Madonna University and its chief security officer, Titu Ugwu.

Meanwhile in Russia, activist Igor Gorlanov was accused by police in Novokuznetsk of violating a March 2019 law against making “insulting statements” towards state authorities online on July 15. The activist had shared a link to a MediaZona article about Yuri Kartyzhev, a carpenter who had the dubious honour of becoming the first person sentenced under the new law after he called Vladimir Putin an “unbelievable f***wit” on VKontakte.

On July 10 Pavel Chikov, a lawyer with the human rights organisation Agora, noted on his Telegram channel that, by his count, more than 20 court cases have been launched referencing the new law against insulting the authorities.

On July 5, #ArrestAntiPakJournalists trended on Twitter with over 28,000 tweets shared within a few hours. The hashtag went viral soon after a Twitter account named @IK_Warriors posted a tweet calling for the arrest of journalists belonging to what they described as “the pro-Indian, anti-Pak media group.” The tweet, which called on others to join the campaign, was accompanied by a photo of a list of journalists to be targeted.

The tweets mainly targeted journalists who criticize the government and the military. The @IK_Warriors Twitter account (IK refers to Prime Minister Imran Khan) bears a picture of Khan and the logo of the ruling party, Pakistan Tehreek-e-Insaaf or PTI. “We are standing for the truth and right [sic]”, the bio of the @IK_Warriors account reads. A cricketer-turned-politician who has been in office for just under a year, Khan's critics say he was hand-picked by the military.

Anyone who gives an alternate solution to the policies of the government or the military is labeled as anti-Pakistan or a traitor. Such trends are not only threatening and intimidating journalists but also putting the life of journalists at risk.

Mauritania’s internet is back on, for now

Mauritanian authorities restored access to the internet after disrupting it for 10 days following the disputed presidential elections of June 23 and resulting protests. The Ministry of the Interior reportedly ordered the shutdown for security reasons, although activists and human rights groups believe the real aim was to prevent the opposition from mobilizing protesters.

Advocates pressure MTN to keep the internet on in Sudan

A coalition of digital rights and free expression groups are calling on telecommunication company MTN to push back against government demands to disrupt internet access following a five-week shutdown in Sudan. The South Africa-based MTN, which is a leading internet provider in the country, implemented the block as military forces in Sudan violently repressed peaceful protesters, cutting off a critical channel for people to report abuses and access emergency medical services. An open letter signed by Access Now, African Freedom of Expression Exchange, Committee to Protect Journalists, NetBlocks, Paradigm Initiative and others says that by pulling the plug, the company contributed to human rights violations.

IBM and Google are working with surveillance tech makers in China. Should we be surprised?

The OpenPOWER Foundation, a non-profit consortium led by Google and IBM and established to improve interoperability of certain kinds of computing hardware, is working with the Chinese company Semptian, according to a report from The Intercept. Semptian has built multiple powerful technical surveillance tools that authorities in China, the Middle East and North Africa have used to vacuum up people’s private emails, texts and web browser histories. The partnership has enabled IBM and US chip manufacturer Xilinxon to collaborate with Semptian to build a microprocessor that enables computers to efficiently analyze immense amounts of data. A Semptian representative told a reporter posing as a customer that beyond China’s well-known digital dragnet, the firm has set up a mass surveillance system in an unnamed country within the MENA region.

US trade agency orders Facebook to pay up — but are they asking enough?

Facebook is facing a $5 billion fine from the US Federal Trade Commission for privacy violations related to the Cambridge Analytica data breach, in which the analytics firm used private information it improperly harvested from 87 million Facebook users to influence voters approaching the 2016 US election. The penalty would be the largest ever imposed by the Commission against a technology company, but privacy advocates still say the figure amounts to a slap on the wrist for Facebook, which pulled in more than $15 billion in revenue alone in the first quarter of 2019.

Are we just ticking boxes? Bringing up and expanding notions of gender in internet policy and governance –  Smita, GenderIT.org