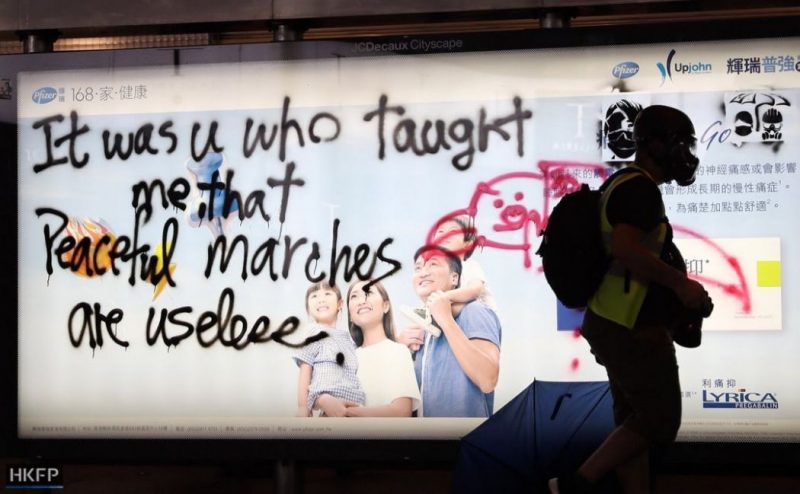 ‘It is U who taught me that peaceful marches are useless.’ Photo: May James/HKFP.

The Advox Netizen Report offers an international snapshot of challenges, victories, and emerging trends in technology and human rights around the world. This report covers news and events from September 14-20, 2019.

Doxxing —  the practice of publishing someone's personal information online without their permission, with the intention to threaten or intimidate — is becoming an increasingly common tactic of state actors seeking to silence their critics.

This week in Hong Kong, a doxxing campaign targeting protesters gained increased prominence when China Central Television (China's state television broadcaster) published a video on its official Weibo account, in which it urged people to use a special doxxing website — hkleaks.ru — to “take off the masks” of the Hong Kong “rioters”.

The website launched in late August and has since published personal information including photos, residential addresses, birth dates, telephone numbers and social media accounts belonging to protesters and journalists covering the demonstrations.

The site has thus far published more than 90 individuals’ personal data. Most of those targeted are pro-democracy lawmakers, student activists and journalists from Apple Daily and the Stand News. The site labelled them as ”pro-Hong Kong independence rioters”.

Why a Russian top-level domain? The doxing website was originally registered as hkleaks.org, but was moved to a Russian hosting service after a complaint was filed invoking Hong Kong’s privacy laws, which prohibit the unauthorized publication of personal data. With the site now hosted in Russia, Hong Kong’s privacy commissioner has little recourse but to submit a complaint to the Russian domain registry, which is state-administered.

Just a few weeks prior to the developments in Hong Kong, Serbian journalists uncovered the origins of Istraga.rs, a website that launched in January 2019 and has become known for targeting journalists and opposition figures by posting their personal information and photographs, and publishing smear stories about their work.

VOICE, a research center run by the Independent Journalists’ Association of Vojvodina, revealed that the previously unidentified owner of the website Istraga.rs is a business partner of pro-government media mogul Luka Rakočević.

Instraga bills itself as an investigative journalism site, but exclusively focuses on opposition figures and independent media, and regularly publishes stories with no cited sources or data to support its claims.

The Independent Association of Journalists of Serbia previously warned that the site had introduced a new genre “pointless investigations” – as an excuse to write defamatory articles which were then promoted on social networks by profiles linked to Serbian Progressive Party (SNS), the ruling party in Serbia. SNS has developed a massive online apparatus similar to troll armies of populist parties in Russia and North Macedonia. These profiles — known as SNS bots in Serbian slang — regularly promote posts and articles from Instraga.

Kerala court rules that internet access is a ‘fundamental freedom’

An 18-year-old university student won her petition to the high court of Kerala, a state in southern India, and brought about a victory for internet rights in the process. Faheema Shirin appealed to the judiciary after she was expelled from her hostel (a student housing establishment) at Sree Narayana College for violating rules that prohibit female students from using mobile phones and laptops between 6 and 10pm, also known as “hours of study.” The rule does not apply to male students.

The Kerala High Court ruled in Shirin’s favor on September 19, citing a 2016 UN resolution enshrining access to the internet as a fundamental right, and finding that in this particular case, “the right to have access to Internet becomes the part of [the] right to education.” The court also found that the administrators of the hostel, who would confiscate students’ electronic devices during these hours, violated their right to privacy, which is enshrined by the Indian constitution.

Being at the state level, the ruling has no bearing on the internet shutdown that has paralyzed the northern state of Jammu and Kashmir. But many Indians have pointed out the stark difference in adjudication of this fundamental right on Twitter.

It would bode well for the Supreme Court to take a leaf out of Kerala High Court's book and adjudicate on the Right To Access Internet for the people in Kashmir.”

On September 3, a Sudanese court ordered telecommunications companies Sudani and MTN to apologize to their customers for disrupting access to their networks at the behest of the military authorities in early June.

The shutdown, which went on for weeks, was the longest in Sudan’s history. The Transitional Military Council, which at the time was the de-facto ruler of the country, said it ordered the internet blackout because of security concerns. But the blackout also disrupted the sharing of footage and information pertaining to the dispersal of a June 3 sit-in by security and military forces, who were calling for a civilian-led transitional government. More than 100 protesters were killed in the crackdown.

Four journalists who worked for the Gam independent online news outlet were sentenced to 18 years in prison on September 9, after being arrested in January 2019. All were convicted on national security-related charges for covering workers’ rights protests at the Haft Tappeh sugar mill in Khuzestan Province. Three activists who participated in the demonstrations were issued similarly long prison sentences.

On September 17, Facebook published new information about its plan to establish an oversight board of experts who will be tasked with reviewing “tough” pieces of content posted to the platform and deciding how th company should treat such posts. Facebook says it will adhere to decisions made by the board (even if it disagrees) so long as they are technically feasible. We'll see how this plays out.