Netizen Report: Change is on the Horizon for Iran. But Let’s Not Forget Human Rights. 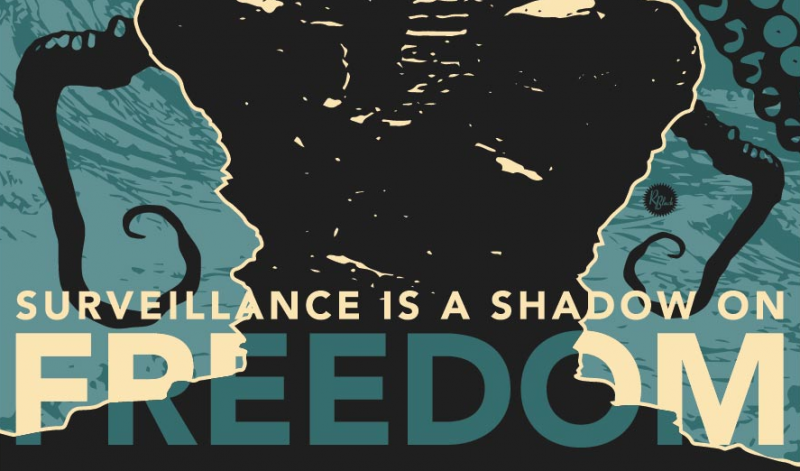 This image was created by Rich Black and the Wikimedia Foundation to spread the word about inappropriate surveillance. Art by Rich Black (CC BY 3.0)

The lifting of nuclear sanctions and the release of Iranian-American prisoners including Washington Post reporter Jason Rezaian on January 16 seemed to bring new hope for progress in Iran.

But while the world watched Iran re-establish ties with the west, Iranian blogger-activist Hossein Ronaghi-Malaki was spending his last hours with his family before returning to prison to serve his 15-year sentence for dissident commentary about the 2009 Presidential elections.

Ronaghi-Malaki  was released on June 14, 2015 to receive medical treatment, but was recently summoned back. Shortly before returning to prison he tweeted about his determination to get justice.

Might be last post but I'm determined to gain my freedom bec I'm innocent. The response to opinions is not prison. pic.twitter.com/esIZjSLh9j

Another prisoner released in the swaps, Iranian-American Nosratollah Khosravi-Roodsari, appears to have been arrested to due to mass surveillance by Iranian authorities. His SMS messages were surveilled and were used to arrest him.

Khosravi-Roodsari was reportedly working as a consultant for the US Federal Bureau of Investigation (FBI) before returning to Iran in 2013. An IranWire investigative report claims Khosravi-Roodsari saw a report about former FBI agent Robert Levinson on BBC Persian and in an effort to impress his contact at the FBI, sent a text message saying that he had information on Levinson’s whereabouts, which in fact was not true. Iranian intelligence monitoring of the words “Robert” and “Levinson” led to his arrest and exposed his connection to the US government.

A three-year ban on YouTube recently came to an end in Pakistan after Google launched a local version of the site that gives the government greater capacity to request that certain videos be removed from the site. At the same time, the country’s Ministry of IT is pushing to pass a cybercrime law that would tighten restrictions on online speech considerably, leading to a debate over the impact of censorship. As leading Pakistani digital rights advocate Sana Saleem writes, “With or without YouTube, it is up to each of us to determine whether we would like to think critically and claim our right to unhindered access to information, or embrace a state-crafted version of it.”

Protesters in Poland speak out against surveillance

Polish citizens took to the streets on January 23 to protest a draft surveillance law that would grant authorities broad access to citizens’ Internet and telecommunications data without court approval or any other form of meaningful oversight. The bill has passed the lower house of parliament but has not yet been approved by the upper house. Alongside protests, Polish netizens are sharing information about how to protect themselves from surveillance using encryption, VPNs and Tor. Thousands of citizens have also signed an online petition opposing the law.

A new cybercrime law in Kuwait sets strict limits on free expression online, according to human rights groups in the Gulf region. The new law criminalizes online activities that would “prejudice public morality”, without clearly defining what would fall under this category. It also institutes stricter punishments for online journalists who criticize state leaders or the constitution, and those who incite breaches of public order or violation of public laws. The law came into force on January 12, 2016.

Four journalists and three human rights advocates facing prosecution in Morocco on charges of “receiving foreign funding” and threatening the “internal security of the state” appeared in court on January 27, only to have their trial postponed for the second time since the charges were filed. Blogger and activist Hisham Almiraat, a member of Global Voices who is among the accused, tweeted:

Our trial is postponed to March 23. Pressure works. Thank you for your overwhelming support #morocco #Justice4Morocco

Russian LGBT activist Sergey Alekseenko was found guilty of distributing “propaganda of homosexuality among minors” on the Internet, via Russian social network VKontakte. Curiously, the “propaganda” was actually a quote from a report by Roscomnadzor (Russia's state media regulator) about Elena Klimova, founder of the “Children-404″ LGBT youth support group, who faced the same charges in 2014. The offending sentence read: “Being gay means being a brave and confident person who has dignity and self-esteem.”

‘Why I went into exile’: A Bangladeshi blogger tells his story

In the face of threats, intimidation and multiple assassinations of secular bloggers in Bangladesh, many bloggers have stopped writing and some have gone into hiding. Blogger and online activist Mahmudul Haque Munshi is among them and recently took exile from the country after receiving multiple death threats.  In a recent post on his blog Swapnokothok (Dreamweaver), he described his experience. Global Voices’ Bangla editor Rezwan translated an abridged version of the post. He writes:

I never thought that I would leave my country…But then I saw that I was being followed everywhere. I became very afraid. I remembered Niloy [another blogger, slain in August 2015] said that they started following him two months before his death.

Those who wanted me to die in vain, I would like to tell them, you will not win. I will live, I have to do a lot of things. I cannot die before achieving some of that.

Android users of the Facebook app can now connect to the social media service via Tor’s mobile browser, Orbot. With the changes, anyone on Facebook can now use Tor’s anonymity features to hide their geographic location when they log in. The tool that will improve users’ capacity to circumvent controls in places like China and Iran, where Facebook is blocked. While this does not mean that users can access Facebook anonymously (the social media platform continues to maintain its Real Name Policy), it does expand Facebook’s reach.

January 25th marked the fifth anniversary of the protests in Egypt’s Tahrir Square. Global Voices commemorated the anniversary by remembering leaders of the Egyptian Revolution.