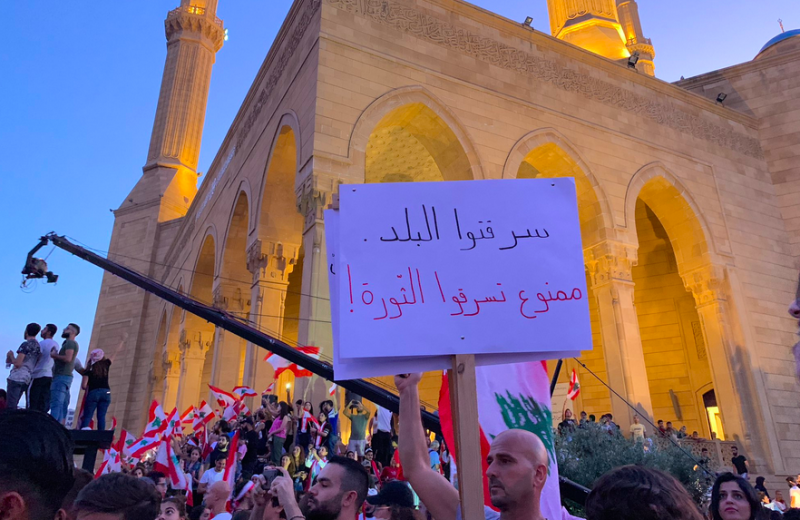 Demonstrators in Beirut. Photo shared on Twitter by @michatobia

The Advox Netizen Report offers an international snapshot of challenges, victories, and emerging trends in technology and human rights around the world. This report covers news and events from October 13 – 25, 2019.

Mass public demonstrations have dominated Beirut, Tripoli and other large Lebanese cities since October 18, after people came to the streets to protest government corruption, failing public services and exorbitant taxation. One significant trigger of the protests was a proposed daily tax on the use of internet-based voice calling technologies offered on services like WhatsApp and Facetime.

The WhatsApp tax has been taken off the table, but the protests have grown in power and intensity each day. Social networks have been flooded with images and videos of tens of thousands of people from various walks of life demonstrating together and calling not only for policy reforms, but for early elections that would usher in a new government.

To keep up on protests in Lebanon, we're following:

There have also been violent confrontations, resulting mainly from military forces and police seeking to block protesters. According to local activists, these have led to as many as 300 arrests. Photos of arrest scenes shared on Twitter suggested that detained protesters, lined up side by side on the road, had their mobile phones taken from them.

These efforts have coincided with digital campaigns discouraging people from joining protests, shared via WhatsApp and other social media services.

Local journalists and independent media houses have been actively covering the demonstrations, while state-supported media have remained largely mum. On October 22, the head of the National News Agency was fired with little explanation. Lebanon Daily Star reporter Benjamin Redd wondered on Twitter: “Did the NNA boss, Laure Sleiman, get fired for doing her job?”

Top leaders gave speeches on October 21, acknowledging the protesters’ grievances and pledging to improve on public services and policy, but the predominant response from demonstrations has been that this is not enough. As SMEX Executive Director and Global Voices author Mohamad Najem put it:

Protestors today:
+ We don’t care about Harriri’s new reforms suggestions, before the deadline even.
+ Down with all this political system. We want a temporary government that lead new elections in the next year.
These our political demands#LebanonProtests #لبنان_ينتفض

Phones are back, but the internet is still down in Kashmir

On October 14, after a 72-day communications blackout, Indian authorities in Kashmir restored SMS and call services for postpaid mobile subscriptions. But internet services and prepaid mobile connections are still suspended.

Srinagar, the main city in Jammu and Kashmir, went under complete lockdown on August 5, 2019 when the government of India revoked Article 370 of the Indian constitution that provided special autonomous status to the disputed state of Jammu and Kashmir. Access to mobile, landline, and internet networks were suspended, while roadblocks were put on the streets and restrictions on almost all movement were enforced. Although some of these measures have since been lifted, the region continues to be heavily controlled by Indian authorities.

Why are Arabic-speaking activists (and regular users) getting censored on Twitter?

Hundreds of Twitter users — most of whom write primarily in Arabic, and are located in Egypt — either have had their tweets censored or their Twitter accounts suspended in recent weeks. Twitter has apologized for the erroneous suspensions, but didn’t explain what prompted them. Experts following the removals have observed that many appeared to be triggered by swear words, which are not forbidden on Twitter.

What at first appeared to be a series of mistakes now looks like something larger, and online activists are taking note, highlighting account suspensions with the hashtags #WeWillSpeak and #هنتكلم.

On October 9, Iranian telecommunications service providers were ordered to block Google Play, Google's official app store, “as soon as possible”. The order is said to have been issued by deputy prosecutor general in charge of cyberspace, Javad Javidnia.

If implemented successfully, this will push Iranians toward using local services that are far more vulnerable to government surveillance, censorship and the mishandling of personal data than many global online services. Even Amin Amirsharifi, the CEO of Cafe Bazaar, Iran’s largest local app store and a primary competitor of Google Play, tweeted that he did not support the move.

Zuckerberg fails to sell Facebook as a free speech beacon

In an October 18 speech at Georgetown University, Facebook CEO Mark Zuckerberg exalted the US first amendment and portrayed Facebook as a platform that had helped make the global internet better by espousing free speech values around the world.

The speech left many internet policy and civil rights experts skeptical. “While boasting of the enlightening effects of the spread of knowledge and information, he ignores the toxic attributes of his own company,” wrote University of Virginia professor Siva Vaidhyanathan.

What Zuckerberg failed to note is that King was the subject of violent assaults (and finally assassination) that were the result of the same kind of hate-fueled disinformation campaigns that infect the Internet and are now aimed at a different generation of civil rights leaders.

Nigerian journalist may face charges for recording conversations in prison

Nigerian journalist ‘Fisayo Soyombo may soon face criminal charges for his undercover work investigating Nigeria’s prison system. In November 2018, Soyombo deliberately defaulted on a car payment in order to get arrested and observe the criminal justice system firsthand. The award-winning journalist spent five days in police custody and eight as an inmate of Ikoyi Prison, in Lagos, where he observed, documented and later reported on multiple incidents of bribery, abuse of prisoners by guards, and other forms of corruption.

Soyombo has “has gone underground” after fleeing his residence on October 21. If found and arrested, he will be charged under Section 29 of the Nigeria Correctional Service Act [Subsection 1 (d)] for possessing and using “communication devices” within the prison to record “conversation through a mobile phone or other devices” without authorization. If convicted, he risks a fine not exceeding 2 million naira [about US$5,500], two years imprisonment or both.

The transitional government put in place in Sudan in August 2019, after the ousting of Omar al-Bashir, is showing some signs of wanting to uphold freedom of expression in the country. At the UN General Assembly meeting in late September 2019, Sudanese Prime Minister Abdulla Hmadok signed the Global Pledge to Defend Media Freedom and stated that “never again in the new Sudan will a journalist be repressed or jailed.”

Earlier that month, the Sovereignty Council of Sudan, which is intended to guide Sudan’s three-year transition toward civilian rule, issued a decree placing the Telecommunications and Post Regulatory Authority under the authority of the Council, and away from the Ministry of Defense. But the rules and policies under which the regulator functions are still unchanged, and the authority has been a key player in deciding and implementing the former regime’s censorship policies with its filtering and blocking system.

“Lingering laws place vague restrictions on these fundamental rights and allow authorities to block and filter content without a judicial order,” writes Mohamed Suliman in an analysis for Global Voices.

Are we any better at judging right from wrong? Automation in content moderation – Namita, GenderIT.org